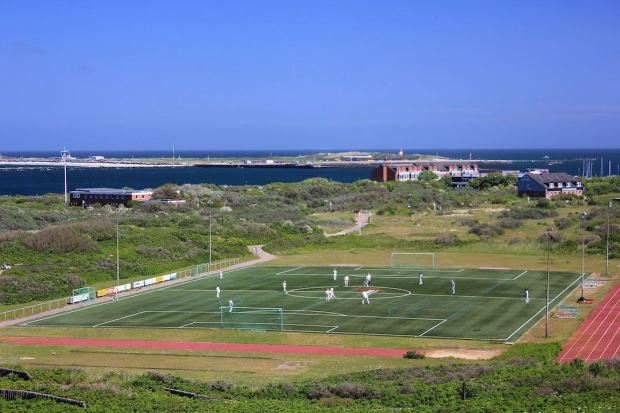 Without wanting to sound complacent, when you live in Europe you get a little spoilt for choice, when thinking about a weekend away. Living up here in the north of Germany means London, Paris, Copenhagen, Prague, Berlin, Amsterdam, Brussels, and Stockholm are little more than an hour away.

Extend that to 2.5 hours and we can be in Rome or Barcelona. In 4 hours? Athens, Lisbon or Istanbul. In 8 hours? New York or Dubai. Yes- it’s a travellers paradise deciding where to go next. Travelling to any of these places needn’t cost much either, if you’re on a budget – which sometimes makes the choice even harder.

But, after you live here for a while, you sometimes forget what’s right under your nose.

The gems in the country we live now – Germany.

And the island of Helgoland is one of them. 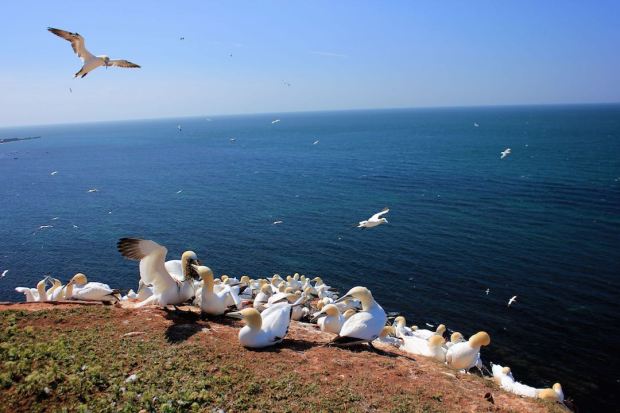 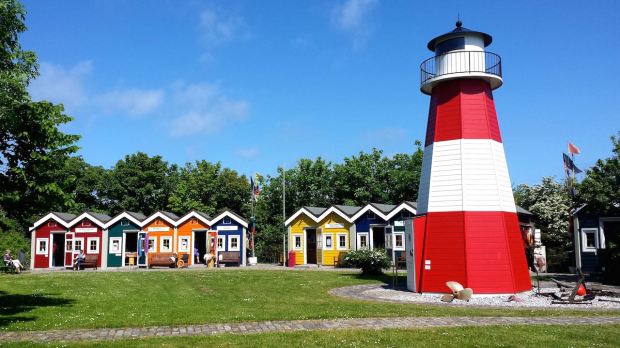 We’ve had amazing adventures in Italy, Spain, Poland, Denmark, The Netherlands – memories to last a lifetime, but this last weekend – was special. And it all came about because my Hubby joined a cricket team here in Hamburg – yes cricket!

The Heligoland Pilgrims are the sister team of the THCC Rot Gelb Cricket Club in Hamburg and we were lucky enough to be included in their annual trip to Helgoland, to play the Fellowship of Fairly Odd Places Cricket Club – from The Netherlands. Not only was it a quirky and some what strange place to meet and play cricket – but absolutely spectacular! The weather also played into our favour, which made for a more enjoyable experience for me – the nominated team photographer and spectator.

As we made our way around the island as a group, you can imagine the attention the Pilgrims attracted with their new, custom made blazers –  in Helgoland’s colours no less (red, white and green). They were asked if they were a band, a choir or a football (soccer) team. Each politely corrected the inquisitive public with no, we’re the Heligoland Pilgrims Cricket Team and proceeded to invite them to the 2 day match at the other end of the island.

Helgoland is a small Island – you can walk from one side to the other within half an hour. Reached only by ferry or small plane, it is located in the North Sea about 3 hours (by ferry) from Hamburg. There are no cars or bikes allowed on the island – although the odd electric taxi is available for some of the more elderly citizens and visitors. The last population count was 1127 residents. The local delicacy is Knieper – a small crab found locally and mostly eaten served hot and whole on a plate or in a bread roll with garlic or curry sauce.

A nature-lovers paradise, Helgoland is one of the sunnier places of Germany and last weekend did not disappoint! It is one of the most colourful places I’ve seen, with almost every second house painted a bright colour, adding Helgoland character at every turn. It has some of the cleanest air in the Northern Hemisphere and is often referred to asthma and allergy sufferers as a place of refuge and rehabilitation.

My Sock Monkey Clive was of course along for the ride and instantly found a friend in the youngest member of the Pilgrim tribe; Little E. She and Clive were inseparable and couldn’t wait to introduce Clive to her favourite softie friend Mooki. Clive loved the sunshine and learnt a thing or two about cricket as well 😉 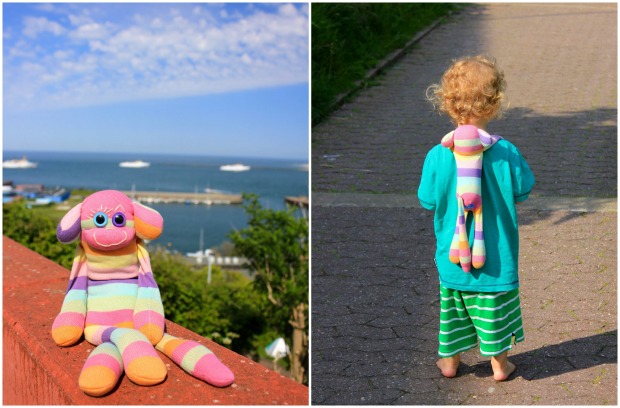 The night before the match started – we visited the local pub Bunte Kuh – nominated as our favourite on the island. A must see if you’re lucky enough to venture here. The local alcoholic beverage is Eiergrog – a concoction of a light rum, a dark rum, egg yolk, sugar and hot water – served warm and frothy in a glass with a straw. Not sure how many locals actually enjoy this drink – it’s an acquired taste – but definitely worth a try.

The pub is covered from head to toe in cows – pictures of cows, soft toy cows, cow statues and sculptures. There’s a life sized cow statue out the front to welcome patrons and all their cows are, as we found out, heavily policed! It seems many drunken or happy customers have tried to steal a cow or two over the years, so all staff are on high alert for any cow-smuggling.

After speaking to the lovely lady-in-charge and asking in my best Australian-German – she allowed me to take a cow with us, for some photo opportunities over the weekend. Even after I had permission to take the cow with me, I was stopped by 2 more staff on my way out of the pub! After some more fast-talking and stern looks, Mr Cow was finally free to come out with us.

We took this opportunity very seriously – you might be able to spot the cow a few times in this post.

This is Helgoland – now how’s that for a place to play cricket!

Looks like photoshop doesn’t it, but I assure you it’s not. They are Helgoland’s famous cliffs, lining the north west corner of the island. The soccer pitch was measured and carefully converted into a cricket pitch and ground. Although significantly smaller than a professional cricket ground, the rules were the same for this friendly game – hit out of the ground on the full for 6 or to the boundary for 4.

It was an extremely close match over both days of the two day game.

After 25 overs each on Day 1 – the Pilgrims were up by a run. It was a perfect first day of cricket, competition was high, but so was the friendly atmosphere of the game, with the main objective of this entire trip being fun. There were laughs, great sportsmanship and encouragement coming from on and off the field for both teams. Everyone who came to play had a go – practicing both their strengths and weaknesses.

Beginning of Day 2 and the Pilgrims went into field. The Fellowship declared after 245 runs for 6 wickets, so the Pilgrims certainly had their work cut out for them. The notorious Helgoland wind was up – but the sun was warming their backs, with only one goal in sight. The target – 246. It came right down to the wire – but with  less than an over to spare, the Heligoland Pilgrims won by 4 wickets! What a game!

Congratulations Pilgrims! Thank you so much for letting me tag along and document this very special weekend away! I hope you all enjoyed it too.

Hi there. My name is Jess. Artist originally from Melbourne, Australia now lovingly hand-making Gus & Ollie Softies and accessories in Hamburg, Germany. Each day in the Gus & Ollie studio is different, which is why I love my job. Questions? Ideas? Requests? Email me. View all posts by Gus & Ollie

This site uses Akismet to reduce spam. Learn how your comment data is processed.

All photographs on this blog, unless otherwise noted, have been taken by me. Please do not reproduce or use these photos without permission. Copyright © 2008 - 2022 Gus and Ollie.
Loading Comments...